The history of Upper Iowa University is the foundation of our traditions and values.  Here are some of the highlights. 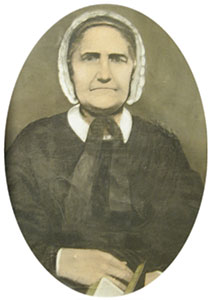 1854 – Elizabeth Alexander, a pioneer woman living near what is now Fayette, proposes the idea of a college.  Her husband, Robert Alexander, donates $10,000; a son-in-law, Samuel Robertson, donates $5,000 and 10 acres of land.

1855 – Construction begins on what has come to be known as Alexander-Dickman Hall.  It is built of native limestone blocks and houses classrooms, administrative offices, the president’s quarters, and student rooms.

1856 – The first Board of Trustees meeting is held, and articles of incorporation are adopted.

January 7, 1857 – Classes begin in what is called the “Fayette Seminary of the Upper Iowa Conference,” which is affiliated with the Methodist Church.

1861 – A company of male students and faculty members enlists in the Army and goes off to fight in the Civil War.  The student-soldiers participate in 17 major battles, carrying a flag hand-sewn by UIU women.  The women students and their professors carry on with their studies and welcome back those who are able to return.

1861 – David B. Henderson, who will later become the first Speaker of the U.S. House of Representatives from west of the Mississippi, leaves Upper Iowa University to fight in the Civil War.

1862 – The first commencement ceremony for baccalaureate degrees is held on June 26 in J.E. Robertson Grove.

1865 – For the first time, there are women graduates in the May commencement exercises.

1875 – Susan Angeline Collins is the first African-American to become a student on campus; she later becomes a missionary in Africa. 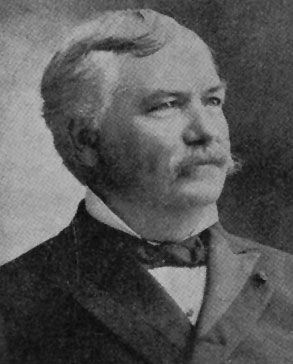 1880 – The “tow’ring white pine trees” featured in the University’s alma mater are planted.

1882 – George Safford Parker, founder of the Parker Pen Company, is a student.

1883 – The first issue of the campus newspaper, The Collegian, appears.  Student John R. Mott goes on to become a leader of the YMCA movement and shares the Nobel Peace Prize in 1946 for his work with prisoners of war.

1885 – Men’s and women’s residence halls are constructed on campus.  Later on, an observatory is constructed and equipped with a telescope.

1890 – An auditorium building is constructed. The students choose peacock blue and white as official UIU colors.  The peacock soon becomes the unofficial school mascot.  The peacock becomes the official mascot in 1920 when The Collegian begins using “peacocks” as the name for UIU athletics teams.

1892 – The first gymnasium is constructed on campus. Milo Maltbie, future world-renowned economist and leader in the administration and regulation of public utilities, graduates.

1893 – The first football team is organized, with 14 men reporting for the squad. The team plays three games the first season: one win, one loss, one tie.

1896 – Carleton Magee graduates; he patents the first parking meter and plays an important role in bringing to light the Teapot Dome Scandal of the 1920s. 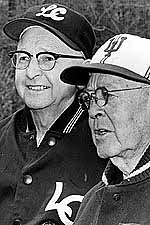 1900 – Andrew Carnegie gives the University $25,000 to build a library, honoring David B. Henderson, his friend.  John “Doc” Dorman graduates.  Doc establishes a dental practice in Fayette and in 1907 becomes football coach at Upper Iowa, a position he will hold for over 50 years. (Doc set the record for having coached football at one college longer than any other person in the United States, and was elected to the Coaches’ Hall of Fame.)

1902 – The David B. Henderson Library is completed.

1909 – A memorial arch, marking the west entrance to the campus, is presented to the University by the graduating class.

1910-1913 – Famous alumni of the University receive their diplomas: John C. Baker, inventor of enriched flour and Desenex skin care products, among others (he had 50 patents for inventions); Dr. Arlie V. Bock, called “the founding father of sports medicine” because of his research into the physiological effects of exercise; Dr. William Albright, instrumental in the deciphering, describing, and dating of the Dead Sea Scrolls; and Zinita B. Graf, noted stage actress.

1915 – The Alumnus magazine is begun, keeping alumni informed of campus doings and news of their fellow classmates. The first yearbook, The Peacock, is published.

1917 – The United States enters World War I; the gym becomes a barracks, and the athletic field is the scene of military drills. Many male students enlist, and women students organize Red Cross classes.

1920 – A systematic program of extension work throughout northeastern Iowa is begun, with Upper Iowa referred to as “a pioneer in the field.” The old gym and observatory are torn down, and a new gym built with an indoor swimming pool. 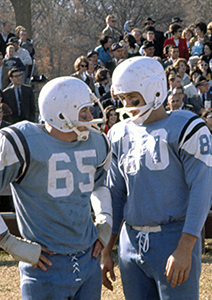 1924 – Upper Iowa University is a charter member of the Iowa Intercollegiate Athletic Association and wins the football championship.

1928 – The University separates from the Methodist Church, which had helped to maintain and support it, and becomes an independent institution. The curriculum is broadened, and academic advisors are assigned to students to provide personalized education.

1935 – A watershed student self-help project is instituted: a broom factory that employs many students and gives instruction in the techniques of manufacturing and marketing.

1941 – Many students enter the military to serve in World War II.

1951-Present – Upper Iowa is continuously accredited by the North Central Association of Colleges and Schools.

1973 – Upper Iowa launches an external degree program, one of the first (and most successful) in the United States.

1981-1994 – The systematic establishment of learning centers is begun: in Madison (Wisconsin) in 1981; in Des Moines (Iowa) in 1983; in Waterloo (Iowa) in 1985; in Prairie du Chien (Wisconsin) in 1988; in Manchester (Iowa) in 1991; and at Fort Riley (Kansas) and in Milwaukee and Wausau (Wisconsin) in 1992. The University’s administrative structure is reorganized, and a new mission statement is adopted. In accordance with mission goals, academic programs are strengthened with new faculty and equipment, and student life is enhanced with new facilities and increased operating budgets. As a result of these changes, enrollments quadruple. A master landscaping plan for the Fayette campus is developed and approved by the Board of Trustees, and implementation begins in 1991; land adjacent to the University is acquired. A visiting North Central accrediting team commends University personnel for the dramatic turnaround and revitalizing of the institution.

1994-2003 – Continuation of the landscaping and building renovation program brings exciting changes to the campus each year, especially with the construction of Lee Tower Residence Hall. The expansion of the Extended University continues, with establishment of centers at Fort Polk (Louisiana) in 1993, Janesville (Wisconsin) in 1994, Fort Leavenworth (Kansas) in 1997, Jackson Barracks (Louisiana) in 2001, and Elkhorn (Wisconsin) in 2002. In 1995, North Central grants approval of the University’s new graduate program. In 1999, with endorsement of North Central, degree programs are begun in Hong Kong, Malaysia, and Singapore, and in Vancouver, Canada. In the fall of 1999, a master’s degree program is offered online. The new millennium is inaugurated with the acquisition of a new physical plant building and the construction of a recreational center on the Fayette campus. In 2003, centers open in Ankeny (Iowa) and Brooks City-Base (Texas).

2004 — Alumna Betty Andres provides a gift to fund a new building, the Andres Center for Business and Education; and the Dr. Alan G. Walker is inaugurated as President of the University.

2005 — The Andres Center is completed, and the University is accepted by the Higher Learning Commissions (North Central Association) into the Academic Quality Improvement Program (AQIP), which infuses the principles and benefits of continuous improvement into colleges and universities (www.aqip.org). After a two-year reclassifying phase of membership in NCAA Division II athletics, the University moves to active membership status and is welcomed into the Northern Sun intercollegiate Athletic Conference (NSIC).

2006 — An RN-to-BSN program and a Master’s in Education degree program are inaugurated, and the University begins preparing for its 150th anniversary.

2008 — The adoption of a dynamic strategic plan focusing on global understanding ushers in a new era for the university. New centers were opened in Cedar Rapids (Iowa) and Rockford (Illinois). Upper Iowa University’s online program is ranked number one nationally among the top online institutions of higher learning. The RN-BSN degree program receives full accreditation from the Commission on Collegiate Nursing Education, in addition to full approval by the Iowa Board of Nursing. The National Division II wrestling championship is hosted by Upper Iowa in Cedar Rapids, Iowa.

2009 — Classes for the newly approved Master of Higher Education (MHEA) begin in January. The Board of Trustees approves a multi-million capital improvement plan, and ground is broken in August for Phase I of the capital improvement plan for three new buildings: suite-style student housing, a student center, and a liberal arts building.

2010 — Construction continues, with ribbon-cutting events held for both the liberal arts building and the suite-style housing during Homecoming Weekend, October 8-9, 2010. Construction also begins on a building in downtown Fayette that will house a restaurant and retail outlet. UIU opens an education center in Fort Sill, Oklahoma. The Athletic Training Education program receives reaccreditation.

2015 — As part of the 2015 Homecoming celebration, UIU officially opens the University Archives and Foster Cass Archives Walk at Fayette Campus.

2016 — Upper Iowa University is awarded a $650,000 S-STEM Grant from the National Science Foundation. In addition to funding seven scholarships to be awarded each year to UIU freshman in 2017 and 2018, grant funds will be used by the University to research and strengthen STEM-related educational and programming opportunities — not only for UIU but all educational institutions. Upper Iowa is among 30 schools nationwide to be newly named to the PAVE (Peer Advisors for Veteran Education) network. The Institute of International Education’s Generation Study Abroad® initiative recognizes UIU for having already exceeded their goals to boost study abroad participation. After two years of renovations, the doors to the President’s Home in Fayette is reopened to the Peacock community. The renovations were funded fully by donations. Adopted by the Board of Trustees, the refreshed University Mission and Vision statements, and establishment of the first-ever University Core Values: “Integrity, Excellence, Accessibility, Respect, Stewardship”